We arrived in India in October. Just in time for a festival day called Dussehra which marks the defeat of Ravana the Wicked from the epic Ramayana. Its a day when effigies of Ravana are burnt in a vicious re-enactment of the battle scene. Firecrackers exploded into the night which gave the impression of being in a war zone.

During the early afternoon in the building across the lane from where we stayed in Inderpuri, New Delhi, a microcosm of two brothers had their own slaying of the Evil Lord with their cap guns. The scene was itself epic, firing at almost anything that moved until their caps were exhausted.

I hid like a foreign journalist behind a plant on the balcony and shot my own shots with my Nikon, and wondered if they would shoot me if they had noticed. But I managed to shoot them first. 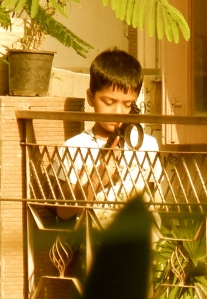